Disclosure: We were sent the items mentioned in exchange for this post - This post contains affiliate links

Funko are known for being the brand that covers all of your fandom needs and with licenced pop culture products from almost every fictional world you can think of of, including Batman, Harry Potter, Jurassic Park, DC Comics and Hello Kitty to name just a few, they have helped to keep the MyMummysPennies household entertained during lockdown! 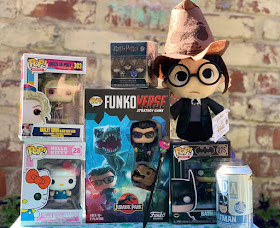 The arrival of our box of Funko goodies couldn't have been timed better, being stuck at home and looking for things to entertain us. We were sent a selection of products including the Pop! Vinyls, Mystery Minis, SuperCute Plushies, FunkoVerse game and more! Read on to find out about each of the products we received. 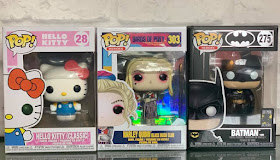 If you've heard of Funko they you will have heard of Funko Pop! Vinyl figures, I think pretty much everyone I know has a few of these on a shelf at home representing a movie series or character they love.  As Funko themselves say, 'Everyone is a fan of something', and displaying these distinctive  'chibi' style collectables are the perfect way to take home a little version of something you love! While some of the rarer Comic Con exclusive and limited edition Pop! Vinyls may be safer kept in their boxes, the smooth, robust vinyl and bright, detailed decoration of these funky figures mean that they can be played with safely and are ideal for imaginative play for older children and tweens! 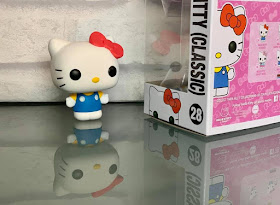 This Hello Kitty Pop! (Classic) takes me back to when I was the same age as my daughter in the nineties and this little Japanese cartoon kitten with the big red bow was all the craze with my friends, still popular now with all ages, this one has been sitting on my daughter's desk supervising her stationery and her school work since she arrived! 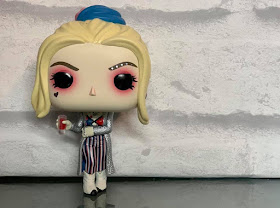 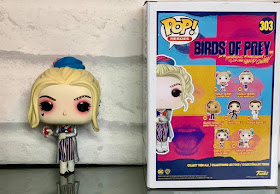 Fans of DC Comics will of course recognise Harley Quinn. This is a character more for the grown ups but oozing with bad girl vibes, and more recently in the Birds of Prey and the Fantabulous emancipation of one Harley Quinn,  a strong dose of feminism she is certainly iconic and this Black Mask Club fugure forms part of the Heroes collection released to go alongside the aforementioned movie, also offering characters  such as Black Canary and Huntress as well as other versions of Quinn. 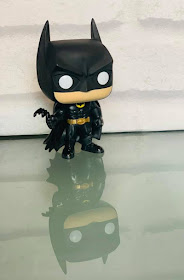 Batman. We can't really talk about iconic pop culture without mentioning the caped crusader now can we? My other half is a huge fan of the Dark Knight, especially the cheesier early incarnations. In fact, one of our last days out earlier in the year was to a race track day where he got to drive the original Batmobile! This 1989 version of Batman takes him back to his eighties childhood and was a welcomed father's day gift. This Pop! Heroes  was released to celebrate Batman turning 80  and comes complete with a batarang! 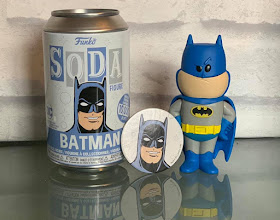 A new and limited edition to the Funko family for 2020, only 10,000 pieces of this figure was released. Presented in a plastic soda can with a pop off lid this figure is very different to the Pop! style Funko figures but is still distinctive and collectable especially dressed in the retro blue and grey outfit. As an extra treat inside the soda can there is a round POG shaped collectable token too!


If I had to name one fictional universe that is loved above all others by members of our household it would definitely have to be the The World of Harry Potter. The nine year old is a fully fledged Gryffindor and loves the original trio of Harry, Hermione and Ron while still enjoying the early books in the series, the almost teen sees himself as a Hufflepuff through and through and is a huge fan of Newt Scamander and the Fantastic Beasts movies series, and both the adults in the house are Potterheads too. We all thoroughly enjoyed exploring the Wizarding World of Harry Potter at Universal Studios in Florida last year and are hoping that our planned trip to Warner Bros. Studio Tour in London goes ahead later this year! So as you can imagine when we found some Harry Potter licenced goodies in our box of Funko fun they were very popular. 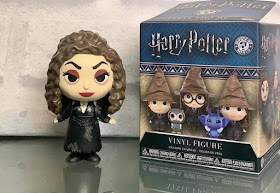 The nine year old is all about the blind bags and the mystery box toys so naturally she claimed the Harry Potter Mystery Mini and even decided to do a YouTube unboxing video for it!
The Mystery Minis have an RRP of £5.99 and come with one of 14 exciting Harry Potter themed characters. Which one will you find?!
Despite being full of sweetness and light, she does have a soft spot for a stylish bad girl with attitude so was very pleased to find a mini vinyl figure of Bellatrix Lestrange inside! As with all the Funko figures Bellatrix is well made and the attention to detail on her outfit is exquisite. She is a smaller figure than the usual pop range at just under 4 inches tall but still stands sturdy on her feet so would be perfect for displaying in a collection or also ideal for imaginative play as Elizabeth chose to do. 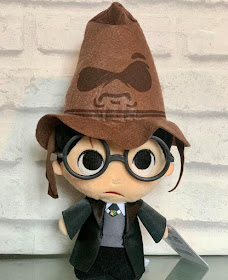 This Harry Potter SuperCute Plushies soft toy with glasses and Sorting Hat was a lovey surprise as I had no idea that Funko sold a range of soft toys to complement their other licenced products! This pint sized wizard in training is just adorable! He is just under 11 inches tall and super soft and cuddly but also has a flat base so can be displayed in pride of place alongside your other Potter collectables after you've finished playing with him. Again no detail has been missed as he is wearing very smart silky robes with hood, and even a tie with the Hogwarts emblem displayed on it. (Note he's not in house colours yet as he's still being sorted!) Harry is wearing his distinctive glasses which are made from moulded plastic to give a fantastic 3D effect and his head is topped with the famous Sorting Hat which you can lift up the brim of to see his lightening shaped scar embroidered on his forehead. The Harry Potter SuperCute Plushies are available in a range of your favourite Harry Potter characters. I managed to nab this one myself and have already added some of his pals to my wishlist! 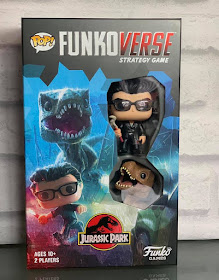 If your family is anything like ours, then you will have become quite familiar with a fair few boardgames during the last few months of lockdown. Playing a boardgame is an ideal activity to get the family engaged in something together and away from screens, not to mention the fact that many of them have an educational aspect as well as being fun!

We were thrilled to find the Jurassic Park expandalone edition of the Funkoverse Strategy game in our box of Fun(ko). I'd heard of this strategy game that is available in a number of different editions, but had never played it before. We've recently re-watched the Jurassic Park and Jurassic World movies so this was the perfect edition for us to play! The playing pieces are mini POP! Vinyl figures of Dr Malcolm and the T-Rex - they even have base plates to stop them falling over! 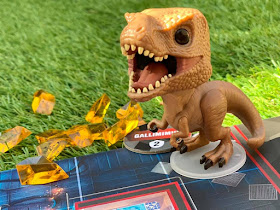 Perfect for those of us who like to be a bit more hands on with our fandom collectables, there are a number of different editions of this tabletop strategy game available depending on which movie series you are into and one of the best things about it is that you can build up your collection and mix and match your characters! Each game can be played on it's own though so you can still get started with just one edition.  The full base games come with four characters but we were sent the Jurassic Park expandalone edition which can be played on its own or used to expand the main game pack. 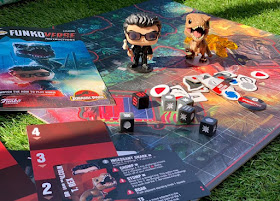 The Jurassic Park expandalone Funkoverse game is suitable for 2 players (or teams) and comes with two game boards or maps and two Pop! Vinyl figures as well as other counters and accessories. It's advised for ages 10+ which I'd say is about right due to the strategic thinking required, we played in teams so my 9 year old had some help from a grown up. If you're not used to strategy games it does take some practise but there are some great tips and instructions on gameplay as well as a video on the Funkoverse website which are great to get you started. 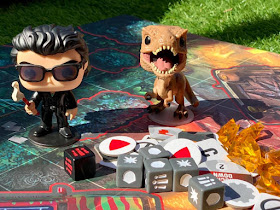 Thanks so much to Funko for sharing their goodies with us and introducing our family to a different and much more interactive side of the Funko product range that I was previously unaware of. Here's to lots more Funko family fun in the future!