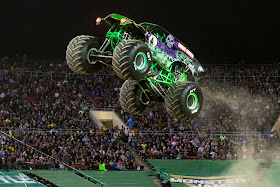 Disclosure: We were invited to attend Monster Jam as guests this weekend in exchange for a review of the event. This post also contains affiliate links.

What happens at a Monster Jam Arena Tour?

I have to be honest here and admit that I didn't really know what to expect prior to the show, I was aware of Monster Trucks and I'd vaguely heard of Monster Jam but that was all, when I mentioned the show to my husband and children, they were all really keen on attending so I thought why not give it a go?

We had tickets to the pit party first, which was great fun and I would really recommend (read more below) and then we headed to the arena to find our seats as soon as the doors opened. I would advocate doing this as although it was an hour before the show started there was still things going on to entertain! The presenters were wandering around the seating areas, talking to families on the big screen and were also interviewing the drivers who were walking around the seating area too! The lovely Brianna Mahon, driver of Wonder Woman and the only female driver in the event, recognised my daughter from the pit party earlier and took her up to stand with her for her interview! As you can imagine this made my eight year old's day!

Once the event itself was ready to start, the presenters explained the format and told the audience how we had a part to play in the show too! After each contest (other than the first tournament which was scored on timings) we had 20 seconds to go to www.judgeszone.com enter the code displayed on the big screen and give a score to the truck that had just competed! My children loved this part and of course gave 10's to their favourites. So remember to bring along a fully charged smartphone to the show as you won't just be taking pictures with it!

The event lasted around two hours and started with the timed tournament, of which Todd Leduc driving Monster Energy took the podium, then a two wheel challenge that we got to vote for our favourites! Max - D was victorious in this one!

There was then an interval to get food and drinks before we returned to some supercross bikes who performed some awesome tricks that left us all open mouthed! My 11 year old especially enjoyed this segment.

Back to the Monster Trucks and the donut challenge came next, some of the trucks seemed to struggle with this in the confined space and the obstacles in the way but this was made up for by spectacular spinning performances by Max D and El Toro Loco!

The final contest of fuel injected fun was the freestyle where each athlete had 60 seconds to use all of the obstacles to showcase to us what their truck could do! This was my favourite event as each of the drivers had now had the chance to perform in the arena and seemed to have got the hang of the different lay out and how the ground differed to their usual tracks. We were treated to some fabulous displays but ultimately Max D was again named the winner and took the title of the event! 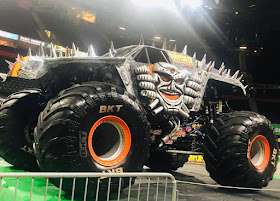 What is a Monster Jam Pit Party?

A pit party is quite an American concept and I wasn't aware of it previously but we decided to check it out and arrived just as the doors opened at 10.30. For this part of the event we were down on the arena floor and each of the drivers were with their trucks waiting to greet fans, chat to them, sign autographs and of course pose for pictures!

This was a fantastic opportunity to get up close to the colossal trucks, check out the awesome paintjobs and designs, take pictures and of course ask the drivers questions.

My daughter immediately fell in love with the Wonder Woman truck, posed for endless photos and loved meeting the driver Brianna.

The pit party requires an additional ticket and does have a small extra charge but if you or your kids have an interest in Monster Truck racing then I would highly recommend it, do go early on though as it started off really quiet but the queues did build up towards the end.

We’re having lots of fun getting close to the trucks and meeting the drivers at #monsterjam at @ManchesterArena @MonsterJam #monstertrucks #familyfun (We’re here to review the show) pic.twitter.com/6v4NZMtLvW
— Jen Dixon (@Mymummyspennies) May 4, 2019

What Souvenirs can you buy at the Monster Jam Arena Tour?


As with any arena tour there is an abundance of merchandise available to purchase as a memento of your day, Flags representing your favourite truck competing were a popular choice and ideal for waving during the races or getting signed by the driver at the pit party! Other items available included t-shirts, baseball caps, popcorn, soft toys and novelty cups containing syrup flavoured ice drinks! The prices started at £10 and increased quite rapidly as I've come to expect from shows like this.

My top tip would be to order some Monster Jam (affiliate link) toys online at around half the price they are on sale there for, to give to your child at or following the show, they'll be just as happy and you will have saved yourself some pennies!

At Manchester Arena you are unable to take any food or drink into the arena with you, I am not aware if this is the case at all of the other UK arenas, but if it is then be aware that you may have to budget for purchasing snacks and drinks while you're there (which at arena prices  aren't cheap) as the event lasts quite a while if you arrive for the start of the pit party! 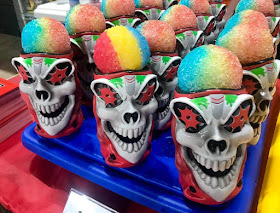 Would we recommend the Monster Jam Arena Tour?


The answer to this is a resounding, yes! We would wholeheartedly recommend the Monster Jam arena tour to any families with children or (or grown ups!) who have any interest in Monster Trucks.

I would also recommend paying the extra fee (I believe it was around £12 for the Manchester dates) to get tickets for the pit party as this was a great part of the experience for us.

One thing to bear in mind is that this is two hours of trucks and bikes driving around in a relatively confined space so it is LOUD! If your children are small or have sensory issues I'd suggest bringing ear defenders to make the experience more enjoyable for them. They were on sale outside of the arena but again you will pay a premium for buying these at the event.

As well as noise, another thing to consider is the fumes from the vehicles, the arena was well ventilated but towards the end of the show these where quite noticeable even up in the seating areas.

We had a fantastic day overall, and the event completely blew my expectations out of the water. It was chilled out, family friendly and pleasingly interactive!

Yes, there were a few mechanical issues with some of the trucks but these were managed well and we still felt very entertained! It did seem that some of the trucks weren't used to the concrete floors and would have been more at home on a dirt track in an outdoor arena, but they were still amazing to see.

My eight year old daughter now has a new hero in the form of Brianna Mahon, driver of Wonder Woman and my eleven year old son has been unusually vocal and and hasn't stopped talking about the show since! 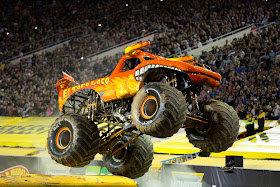 Although the final show in Manchester is today, the tour continues around the UK, visiting the Principality Stadium, Cardiff on the 18th May 2019 and then Coventry Ricoh Arena on the 8th June 2019 and tickets can be purchased from www.monsterjam.co.uk.

Don't forget to visit Facebook.com/MJOnline and follow @MonsterJam to keep up to date with all the Monster Jam news!
My Mummy's Pennies at 13:57